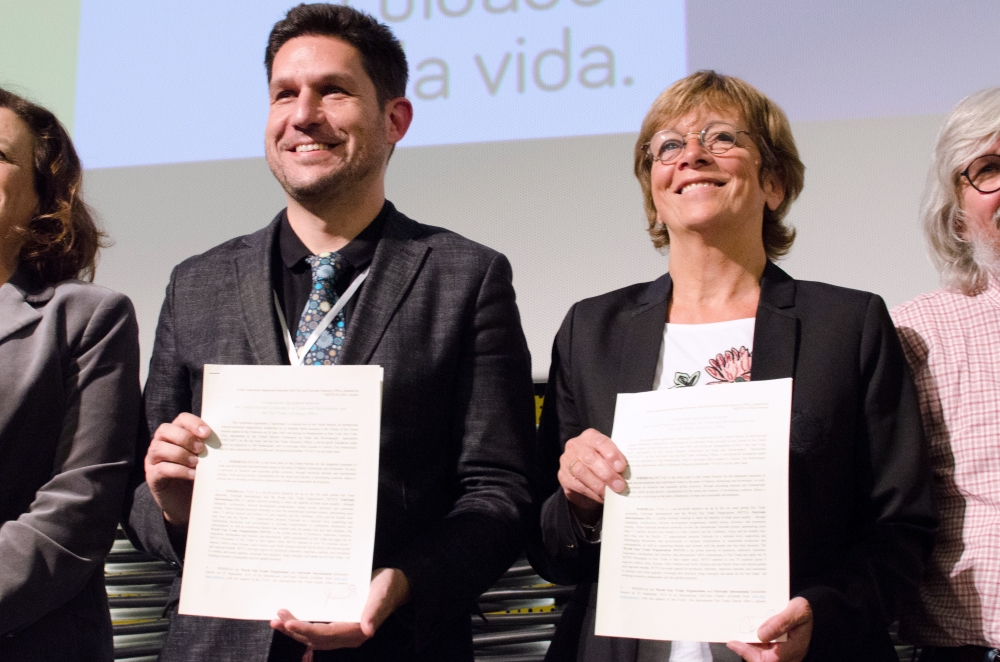 The Brussels-based Fair Trade Advocacy Office and UNCTAD are joining forces to improve the living and working conditions of artisans, workers and smallholder farmers and producers in Africa, Asia and Latin America. The two organizations, which have both been calling for a more equitable trading system for decades, signed a Memorandum of Understanding (MoU) on 19 October in Madrid.

“From day one, our belief was that the best way to help developing countries grow should come not simply from distributing aid, but through encouraging their trade,” Isabelle Durant, UNCTAD’s deputy secretary-general, said.

“But for trade to be a tool for development, everyone must get a fair deal,” Ms. Durant said. “This is a philosophy we share with fair trade advocates.”

More than 2,000 fair trade towns now exist – a phenomenon that underscores the growing concern citizens and governments have with current trading practices. And concerned consumers increasingly speak up with their purchases.

Global sales of fair trade certified goods – such as coffee, cacao and bananas – climbed 8% in 2017 to reach €8.5 billion ($9.74 billion), according to Fairtrade International’s annual report. The profits put an additional €178 million ($204 million) in the pockets of 1.6 million farmers and workers.

Get rid of labels

But what about the billions who don’t have a label?

For Mr. Corbalán, the long-term answer isn’t to increase certification, it’s to change the system so that all trade is fair.

“Our ultimate goal is to get rid of fair trade labels” he said.

“We want all farmers to receive a decent price. We want all cooperatives to be strong and able to negotiate the terms of trade. If there’s eventually no need for fair trade labels anymore then it’s very good news,” he added.

“But we need help because we cannot do the job alone.”

Partnering with UNCTAD, he said, will help get things moving in the right direction.

According to the MoU, the partnership will focus on “promoting a fair and equitable distribution of benefits among value chain actors, especially workers, artisans, smallholder producers and micro, medium and small enterprises.”

“We trust the cooperation of the fair trade networks with UNCTAD will contribute to more fairness in global supply chains and a proliferation of fair trade enterprises” Mr. Corbalán said, adding that the priority sectors will be agriculture, home-wear, jewellery and clothing accessories, leather, cosmetics and textiles.

Ms. Durant said: “I am very happy to sign this MoU tonight, I am certain this will set the first of many steps leading to the change that the developing countries need.”

previous next
We use cookies to ensure that we give you the best experience on our website. If you continue to use this site we will assume that you are happy with it.Ok