You are here » Home » News » No climate resilience without trade justice

No climate resilience without trade justice

The Fair Trade movement calls for the demands of producer organisations to be heard in the negotiations on the global climate crisis on the occasion of COP25.

(Brussels, 28.11.2019) In the run-up to the Climate Summit, the World Fair Trade movement urges Parties to the United Nations Framework Convention on Climate Change (UNFCCC) to recognise Fair Trade policies and practices as a crucial component of climate mitigation and adaptation strategies.

Faced with droughts, floods, and unpredictable weather changes, more and more smallholder farmers are forced to leave their fields and migrate. Therefore, the Fair Trade movement calls for urgent, concrete and ambitious action to address these adverse effects of the climate crisis, which put at risk the most vulnerable populations, world food security and, by extension, the achievement of the Sustainable Development Goals. 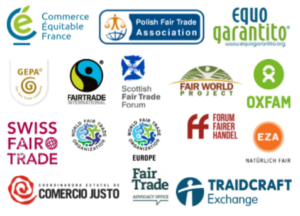 The Fair Trade movement warns that current unsustainable business models, where the wellbeing of people and planet are often sacrificed in the pursuit of profits, remain a key driver to the accelerating climate crisis.
“The sad truth of the climate crisis is that it devastates the most marginalised communities, who are the people least responsible for the crisis. This is why in tackling climate change, we must also over-haul global trade and business models to put the interests of these people first,” says Erinch Sahan, Chief Executive at the World Fair Trade Organization.

Transparent supply chains, a more equal distribution of value among its actors and observing Human Rights Due Diligence are crucial factors for truly bolstering the climate resilience of smallholder farmers. Moreover, better remuneration, technical support and better access to finance is needed to allow them to make vital investments into climate mitigation and adaptation measures.

Fair Trade provides concrete tools and tested ways of ensuring these crucial components for smallholder farmers and marginalised producers, and thus it represents one obvious tool among many that must be employed to mitigate the climate crisis. Nevertheless, the sheer scale of the crisis means that we cannot rely on consumers alone to demand more sustainability and trade justice as a way to ensure climate resilience.

“Climate change has evolved into a climate crisis. We must now focus on supporting small-holder farmers in adapting their livelihoods to a crisis that was not of their making. Ensuring the sustainability of agriculture and fair trading terms requires real action from all of us – from small-holder farmers to government, businesses and consumers. We call on the leaders at COP25 to play their part and catalyse climate and trade action,” says Dario Abril Soto, CEO at Fairtrade International.