The breakfast, which was hosted by MEP Bernd Lange (Germany) from the Group of the Progressive Alliance of Socialists and Democrats and Chair of the International Trade Committee, and organised by the Fair Trade Advocacy Office, was attended by over 140 participants. It was possible thanks to the financial support of the European Commission and the Trade for Development Centre, in the framework of Belgium’s Fair Trade week, an initiative of the Belgian Development Cooperation.

MEP Bernd Lange said, “I am very happy to host the first fair trade breakfast of this term in the European Parliament. European trade policies should contribute to the achievement of sustainable development goals worldwide and fair trade is an interesting tool to achieve those goals. It also helps to make people in Europe aware that what we consume here has an impact on the environment and the conditions in which goods are produced elsewhere. We as MEPs have the responsibility to make sure that human rights are protected throughout the whole supply-chain of goods that we import.”

The attendees were presented with the Fair Trade movement’s views on how the EU could create an enabling policy environment for Fair Trade and sustainable supply chains in the 2019-2024 term. This includes calls for small-farmer and worker-friendly Human Rights Due Diligence Legislation, EU action plans for fair and sustainable cocoa and textile supply chains, a pro-sustainability interpretation of EU competition law, and measures to promote the uptake of Fair Trade practices in the EU and its partner countries. This was followed by a debate amongst participants. 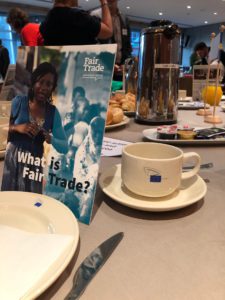 Bernd Lange invited MEPs to join the Fair Trade Working Group, an informal group of cross-party group at the European Parliament. The event concluded with an opportunity for networking and taking photos with speech bubbles that demonstrated different commitments and policy demands.

For more information, please contact Sergi Corbalán at corbalan@fairtrade-advocacy.org or by calling +32 2 54 31 92 3.

previous next
We use cookies to ensure that we give you the best experience on our website. If you continue to use this site we will assume that you are happy with it.Ok