You are here » Home » News » New EU Regulation on deforestation-free products: the good and the bad

New EU Regulation on deforestation-free products: the good and the bad 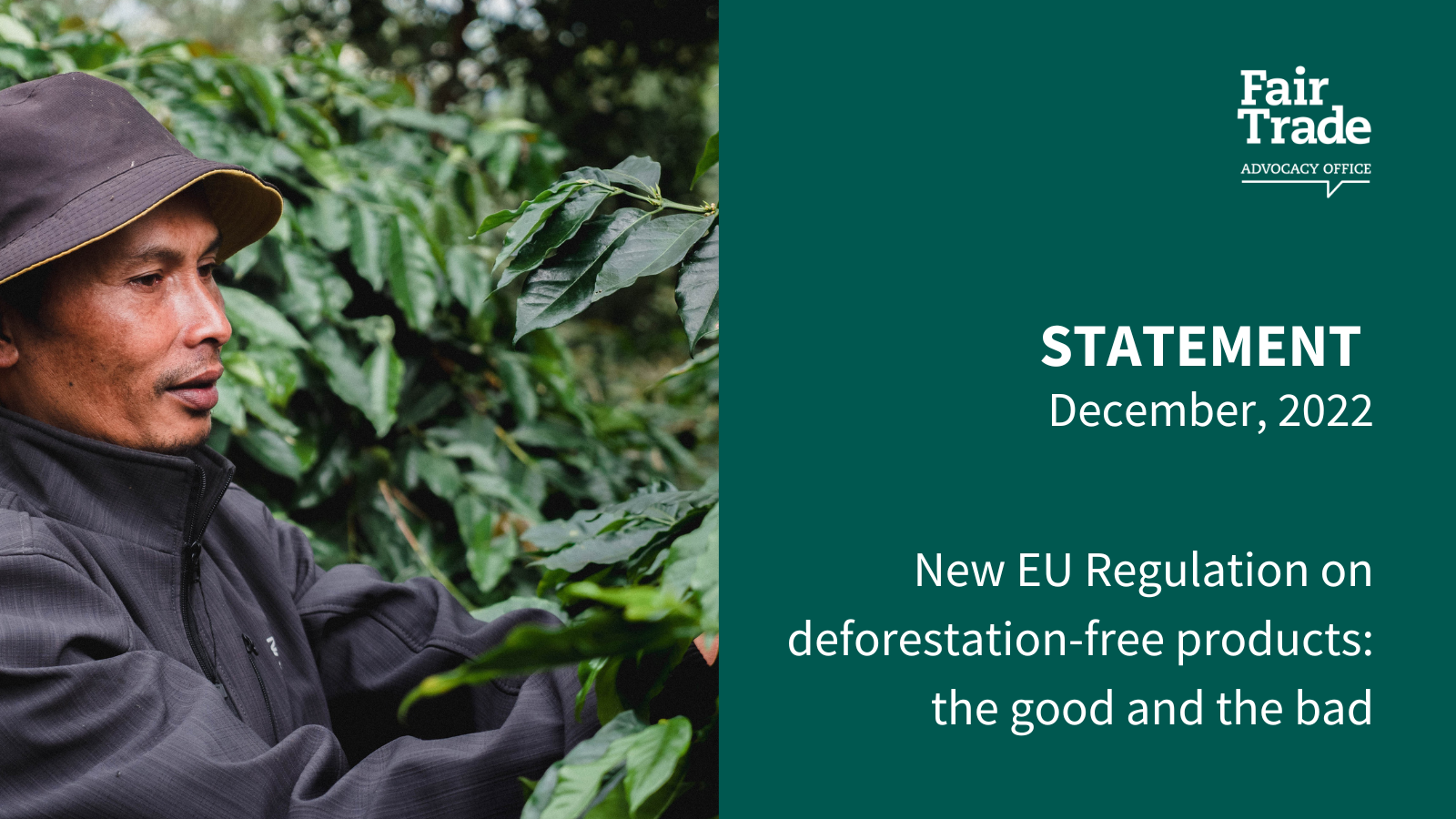 After more than a year of intense negotiations and right before the start of COP15, the European Parliament, the Council and the Commission have reached a provisional political agreement over the final text of the EU Regulation on deforestation-free products. The proposed new legislation would guarantee that the products that citizens buy on the EU market or that are exported from the EU do not contribute to global deforestation or forest degradation.

“While the new rules are a steppingstone in the right direction and will surely help to purge deforestation from EU supply chains, remaining loopholes might dilute their capacity to effectively decouple agricultural production from deforestation on a larger scale” comments Charlotte Vernier, Policy and Project Officer at the Fair Trade Advocacy Office, and team lead on deforestation.

Negotiators have agreed on extending the scope to other commodities such as rubber or charcoal but maintain the initial narrow approach of the Commission’s proposal on protected biomes. This constitutes a missed opportunity to prevent the conversion of other valuable ecosystems that are today under major threat and opens up the door to adverse displacement effects.

The provisional agreement sets strict mandatory due diligence rules for companies that will be obliged to trace back commodities to the plot of land where the latter were produced. We strongly welcome this level of ambition as it will help reduce the complexity and opacity of supply chains. With the introduction of a new mandatory polygon mapping obligation for land over 4 hectares, it will however be key to consider the specific compliance challenges that smallholders may face, and design fit-for-purpose support measures to avoid their market exclusion.

In order to alter companies’ business-as-usual activities through a qualitative and inclusive process, meaningful stakeholder engagement is recognized as a key component of due diligence as per existing international due diligence standards, such as the OECD Guidelines and the UN Guiding Principles. Including meaningful engagement as part of the country benchmarking is a positive step but addresses different stakeholders and objectives – it does not replace the need to fully embed meaningful stakeholder engagement in companies’ due diligence obligation. On a positive note, EU decision makers managed to agree on a certain percentage of checks that will be conducted as well as on a satisfying penalty system to ensure greater enforcement.

However, “this legislation won’t be good for nature, if it’s not good for people” stated Charlotte Vernier and added that the FTAO regrets seeing the weak level of protection offered in the final text to the rights of Indigenous Peoples compared to what the Parliament and EU citizens were calling for.

“To succeed in the global fight against the twin climate and biodiversity crises the EU must take the responsibility to expand its approach beyond a single metric and adopt a truly systemic approach” continues Charlotte Vernier.

The FTAO has noticed with great concern the absence of any references to smallholders in the official communiqués even though a large majority of the production of covered commodities such as cocoa and coffee lies in their hands.

In this context, a few unresolved issues remain and crucial elements are still to be agreed upon in the upcoming weeks at a technical level. Among them is the need to ensure an obligation for operators to undertake reasonable and documented efforts to support the compliance of smallholders including through fair pricing mechanisms.

We call upon policymakers to consider income as a vital part of the puzzle for the structural changes needed to happen. It is only by allowing farmers to grow their businesses out of poverty that they will be able to invest in more sustainable farming practices that respect planetary boundaries. “If smallholders can’t cover the costs of production and lack savings for additional investments, the transition toward a deforestation-free agricultural sector will move out of reach” says Charlotte Vernier. If this element isn’t properly addressed by the Regulation or left out of scope, smallholders will see themselves trapped in economic realities where expanding their land through deforestation is the only economically viable solution left to secure their livelihoods.

In the absence of a needs assessment that civil society organizations and producers’ networks have been calling for, it is furthermore of utmost importance that the Regulation foresees in the short term, maximum 2 years after entry into force, an in-depth evaluation of the impact of the regulation on farmers, in particular smallholders, indigenous peoples, and local communities and the possible need for additionalsupport for the transition to sustainable supply chains.

In its 2019 Communication on “Stepping up EU action to protect and restore the world’s forests”, the Commission committed to “work in partnership with producing countries to reduce pressures on forests” and to “support[ing] action to transform commodity value chains such as coffee, cocoa, palm oil, and livestock”. However, actions to deliver on this commitment have so far been piecemeal and insufficient to reverse a so far rather top-down approach in the way the proposal has been developed and communicated to partner countries. We look upon the Commission now to walk that talk, towards a comprehensive and complementary set of demand and supply-side measures that would be truly conducive to structural changes on the ground, without leaving no one behind.