(Brussels, 12 December 2019) The Fair Trade movement welcomes the European Green Deal unveiled yesterday by the European Commission President – but calls for small farmers and workers in the Global South to be included as equal partners in a “just and inclusive” transition to more sustainable consumption and production.

“The drivers of inequality and climate change are intrinsically linked, as are the solutions,” said Sergi Corbalán, Executive Director of the Fair Trade Advocacy Office. “As the Fair Trade movement has warned during the current UN talks in Madrid, climate change exacerbates the poverty and vulnerability of small scale farmers and workers. Fairer value chains, on the other hand, can help to achieve social, ecological and financial sustainability.”

Corbalán welcomed the Green Deal’s focus on textiles and electronics in future EU efforts to promote a circular economy, but said that it must take account of the impact of supply chains not only on the planet but also on people, as recommended in a study published two days ago by the European Centre for Development Policy Management. 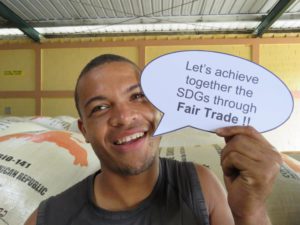 “We also applaud the “Farm to Fork” strategy to improve the position of farmers in the value chains”, he said. “But it is regrettable that the Commission only acknowledges that ‘European farmers and fishermen are key to managing the transition’ – ignoring the important role of non-EU farmers who grow and supply food consumed in Europe. Paying fair prices to producers, wherever they are based, is a prerequisite for a sustainable and fair food supply.”

The Fair Trade movement sees in the proposal for the EU “Neighbourhood, Development and International Cooperation Instrument” to support private investment in the Global South an opportunity for prioritizing business models designed to achieve social and environmental objectives, such as Fair Trade enterprises and cooperatives, rather than businesses that value profit maximisation at the expense of people and planet.

Among other measures announced in the European Green Deal, the Fair Trade movement welcomes the commitment to promote, via regulatory and non-regulatory measures, imported products and value chains that do not involve deforestation and forest degradation, while urging the Commission to include fair prices and living incomes for farmers as key elements of these measures.

“Finally, we call upon the Commission to implement a coordinated strategy across EU policy areas to promote not only green, but sustainable public procurement – as laid down in the UN Sustainable Development Goals,” Corbalán added.